FREE DOMESTIC SHIPPING FOR AN ORDER OF $200+

Every time I’m making one of these custom collectible guitar picks, it brings back memories from my childhood. Like a typical teenager, I was in the process of discovering myself. Grunge style was in, MTV was cool, so naturally, my sister and I wanted to learn how to play guitar. Of course, back then I only had a plastic guitar pick though I actually preferred to use my fingers to pick the guitar.

We both signed up for a group guitar class. Our dad would drive us there once a week in the afternoon for our music lessons. One of our mom’s sisters happened to have an old guitar laying around so she sent that guitar over for us to practice. Later on, we had a private teacher that we found through a newspaper ad coming into our house. Back in Indonesia, private lessons were actually affordable.

He was a patient dude with unruly hair and introduced us to a way of learning without actually having to read music notes. I was getting good at playing solo guitar under his guidance. I knew how to play a couple songs well enough and my classmate in high school had this crazy idea that we would form a band and I’d be the bassist. But like many things in my childhood, playing guitar was just a passing fad to me.

Fast forward a decade and a half later, I moved to the US and married my best friend. His father, my father-in-law, is a weekend musician when he’s not busy engineering. He loves playing guitar, he loves country music for some reason, and he wrote some original songs; one of them is about beans and farts.

He called his studio Stormy Sommers, a name play of his fierce personality and his last name. In the basement of his house, he has an amateur recording studio and a nice collection of guitars displayed. He bought a saxophone a few years back and boy that thing is loud! When he was practicing it sounded like a dying goose is wailing inside the house. xD

On one Father’s day, I decided to design and make the Stormy Summer guitar pick to give as a Father’s Day gift to him. He loved it! The design was inspired by my love of puzzles. These puzzle pieces are cut one by one from three different metals and it’s quite a challenge to get them soldered as you can observe here, some of the pieces are literally smaller than a quarter of a fingernail.

For one of the orders for the Stormy Summer guitar pick, a client of mine asked if I could include their anniversary date on the back. I happily complied. She left me a nice little review on facebook. Nothing made my day better than reading a positive review from my clients!

As I pride myself as a Dream Visualist, I open myself to custom orders. Austin came to me asking if I could make her a custom engraved guitar pick necklace for her first anniversary gift to her husband.

She wanted to surprise him with something not only commemorating their union but that signifies both their passion for music and each other. Her husband is a hobbyist musician and loves the guitar. He recently had mentioned wanting to replace a leather necklace of his that broke.

The answer is yes, easily.

The front would have a special portion of their wedding song and the back has a “Once and for All” quote along with their wedding date and a heart. Special note to make it dull and manly.

The picture below shows both sides of the custom etched guitar pick pendant.

Here’s what she had to say for the final result. Once again, I’m a happy camper.

Subscribe to Cutie Society for fun and educational stories from the blog.

How to Tie Leather Knots for Necklaces 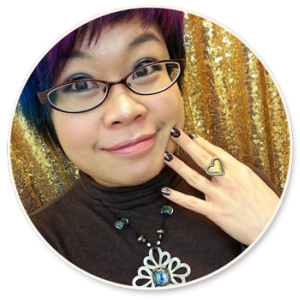 Everything I make is guaranteed with care for up to two years under the Cute Care service.

Hang out with me

Close Menu
Do NOT follow this link or you will be banned from the site!
×
×